Bases are found on nearly every Battlefield, they play an important aspect in DWO so it's best to know the types of Base and how to Capture them.

As you can see each base is Numbered like a dice. (this will not effect what type the base is)

There are 6 types of Base ~

The Flag on the corners of the Map (as seen above), each Faction has 1 Supply Base during battle. There is 2 officers in the Supply Base.

Upon Taking the Supply Base 3 of the 4 Urns in all Enemy Bases will break, and Allied Morale will increase.(Urns Explained at Bottom of this Section)

Tower Bases will have a fully open entrance, and easily noticable Towers in all 4 corners. To Capture this Base you must destroy all 4 Towers

Towers are considered Objects so only the Damage Stat will deal damage to them.

Troop Bases have a distiguishable Oriental Design at the entrance.

Inside you will find 8 groups of troops (each group consists of 1 captain and 4 privates) that consists of 40 troops in troop base at a time. In order to Capture this base, you must kill all the Troops inside - they will respawn for a total of 100 troops (20 groups). Best method of capture is to use the 20, 20, 20, 40 formula, which requires the player gather 20 troops at a time (half of the base), then go for another 20 troops on the other half of the base, then another 20 troops, and finish with gather all 40 leftover troops in the bases to finish capturing the base.

Troops are Human so they are affected by the Attack Stat.

Captain Bases will have a Platform above its entrance as well as 2 catapults by each corner.

Inside you will find 4 Base Captains hiding in each corner. To capture this Base you will need to kill all 4 of the Base Captains, The best Method is to run around gathering them up (will follow you when you get close enough) then kill all 4 in 1 combo.

Base Captains are Human so they are affected by the Attack Stat.

Officer Bases can be identified by the 2 Archer towers at the entrances.

Inside you will Find 1 Officer and some Troops - Archers in the corners. To Capture this base you need to Kill the officer, like a Supply Base he will have high Health. if your attack is low it is suggested that you destroy the Urns in the Base first as they will heal the officer. (more about Urns at end of this Section)

Officers are Human so they are affected by the Attack Stat.

As you can see above the entrance to these Bases has a roof and 2 additional flags.

Inside you will Find 4 Juggernauts. 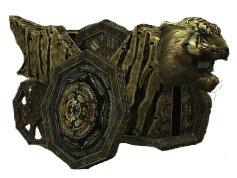 Juggernauts are rare in Dynasty Warriors Online in the fact that they are Objects yet can be healed by Urns like Humans and can move, However they are still ONLY affected by the Damage Stat.

To Capture a Juggernaut Base you must destroy all 4 Juggernauts. be careful as they will breathe fire at you as well as shoot Fireballs,

Lion Statues also are found in the Juggernaut Base

These will also shoot Fireballs at you so be cautious. they can turn 360 degrees aswell ^^

Urns are found in every type of Base and there will always be 4. Each Base will have an Element (random element, it is not by base type) you can tell the Element of a Base either by the small Talismans stuck all over the outside of the base, or by the colour light coming out of a Urn.

When you capture a Base with an Element Equiped, the base's Element will change to the Element you have Equiped